Manti is common in most Turkish cuisines as well as in South Caucasus, Central Asia, Afghanistan, Balkans, Bukharan Jews, and Chinese Muslims cuisines. Manti is also eaten nowadays in Russia and other post-Soviet countries, where the dish has spread from the Central Asian republics.

Typically, the dumplings consist of a mixture of spiced meat, usually lamb. Some recipes also use ground beef in a dough wrapper that is either boiled or steamed. Based on the geographical region, the size and shape differ greatly.

Usually, the dumplings are topped with a yogurt and garlic sauce. The name of the dish is derived from mantu, meaning dumplings. In the 13th-century nomadic Turkish tribes had initially brought them from Central Asia to Turkey.

The whole preparation and cooking time is 1 hour and 30 minutes. This recipe is suitable for at least 4 servings. 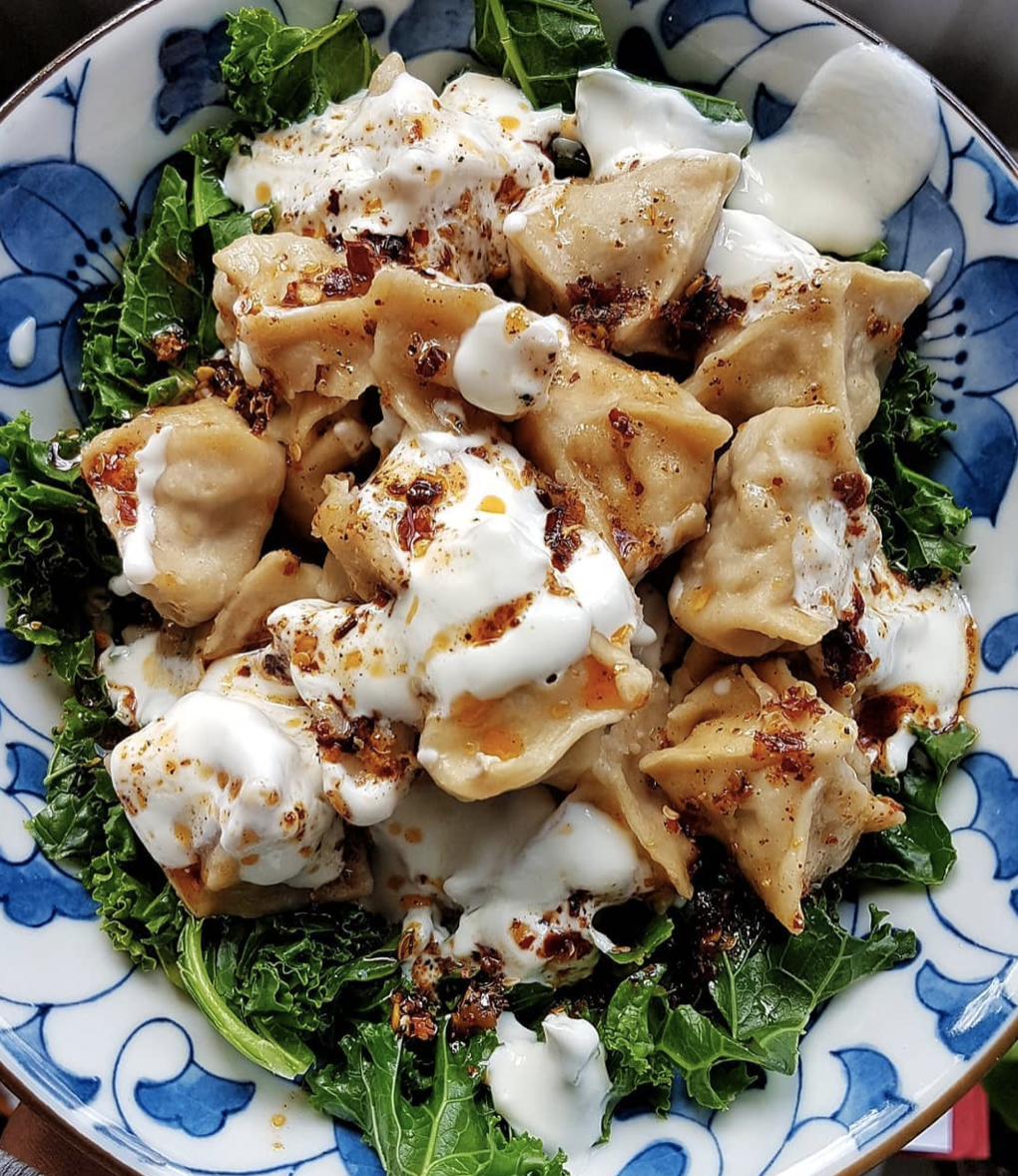 Step 1: In a mixing pot, add the flour and the salt. Next, add the eggs and water, then combine well with your hands. If required, add more water to form a moist dough. Cover and set aside for 30 minutes total.

Step 2: Shred the onions and set them over a bowl in a colander or sieve; rinse and discard the juice. Mix the cabbage, ground beef, salt, and pepper together; blend well with a spoon until mixed.

Step 3: Divide the dough into two parts, and flour a work surface slightly. Keep one piece of dough covered while rolling out the second part into a rectangle. Roll the dough as thin as possible. Slice the dough with a knife or pastry wheel into 2″ squares.

Step 4: In the middle of each square, put around 2 teaspoons of meat filling. Seal the dumplings by gathering the edges of the dough and pinching them together to form a package at the end. To avoid them sticking, move the finished manti to a floured plate and sprinkle more flour over the manti. Repeat with the second portion of the dough.

Step 5: In a small skillet, heat the oil and red pepper flakes over low heat until the pepper flakes have begun coloring the oil; do not let them burn. Take it off heat. Stir the minced garlic in the yogurt, then set aside.

Step 6: Bring a big pot of salted water to a boil over medium-high heat and cook the manti for 20 to 25 minutes until the filling is no longer pink, and the dough is soft. Then drain of manti from the water.

Step 7: Divide the manti into four portions. Sprinkle the yogurt sauce over the manti, and sprinkle with the hot pepper oil. 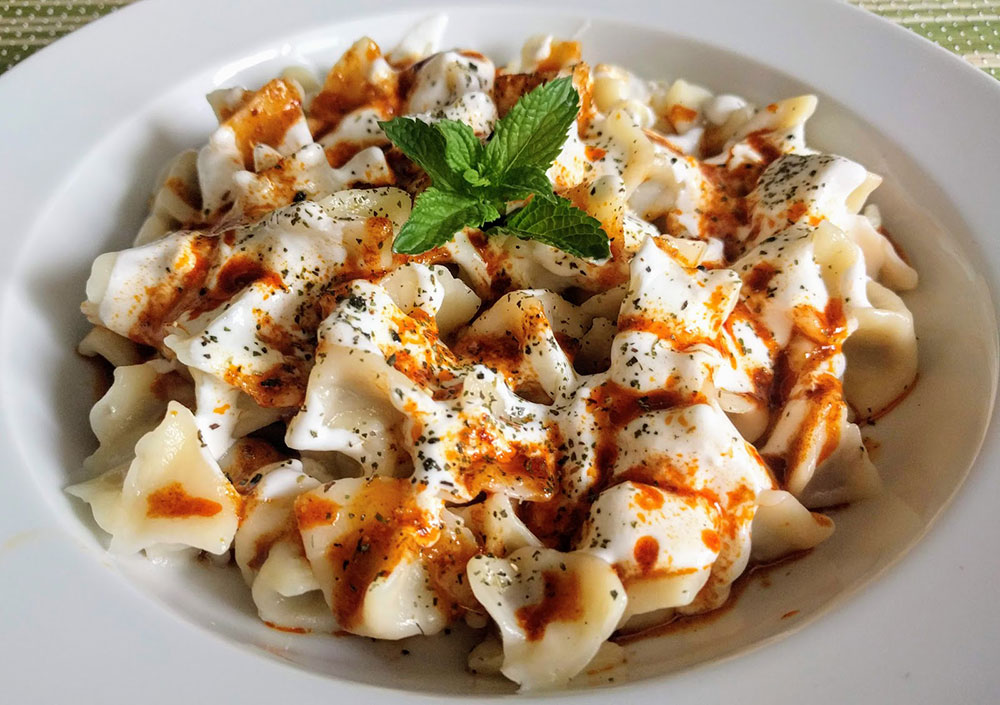 Every square is loaded with a mixture of ground beef, onion, and spices, and shaped like a small pouch, pinched at the end. Shortly afterward, the manti dumplings are fried or cooked in salted water and drizzled with a white sauce and a red sauce providing freshness and spiciness.

Since making manti is time-consuming, most Turkish women get together and turn it into a collective activity that makes planning both easier and more fun. The major feature of Turkish manti is that in Asian and European cuisines, they are considerably smaller than their ravioli-like relatives.

In Afghan cooking, the mantu is filled with beef or lamb combined with thin onions and spices, steamed and then covered with a very traditional sauce of yogurt, dried or fresh mint, lemon juice, and thin or pressed garlic.

Usually, the mantu are often served with a very small quantity of tomato-based sauce that can contain split peas, red kidney beans, and/or some ground meat sautéed. However, the quantity of yogurt sauce is much larger than the tomato sauce.

Unlike the Central Asian varieties, manti are usually boiled or baked rather than steamed like they are in Anatolia and Transcaucasia. For more international snack recipes, click here. 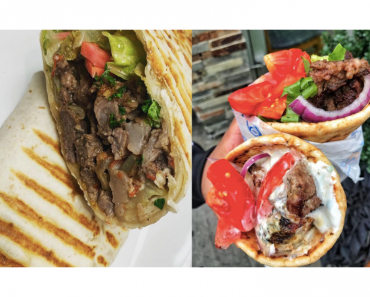 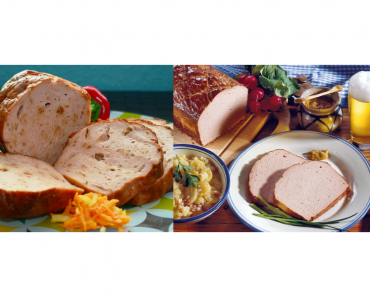 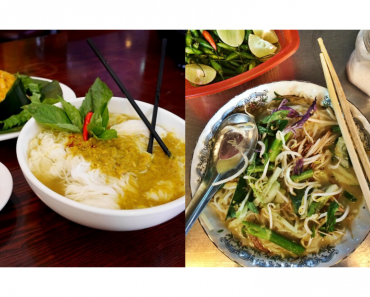 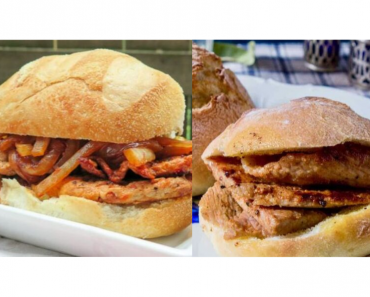 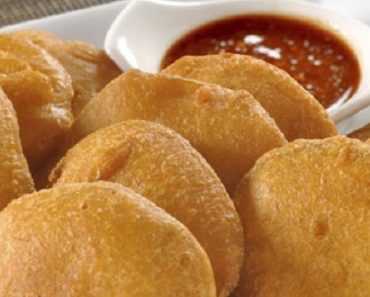 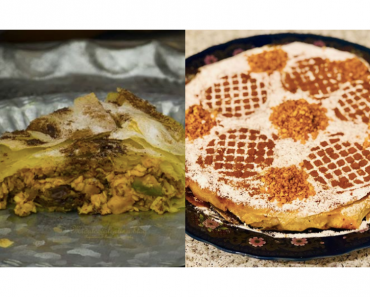