The homemade Goda Masala is the spice powder which blends various whole spices. All the different types of spices and condiments used for Goda Masala Recipe are popular in Maharashtrian Cuisines. The combination of all these various ingredients makes an aromatic and unique flavoured spice mix powder. Although, this powder is available in store but the homemade is always better.

Description: All the different types of spices and condiments used for Goda Masala Recipe are popular in Maharashtrian Cuisines. It is sweet smelling spice mix powder.

Note: You can use any kind of dry red chillies, but it is better to use Kashmiri red chillies. You can add Mace as well if you want. If you like Haldi, you can add turmeric powder too.

The freshness and taste of the homemade powder cannot be beaten. If you are fond of eating the tasty and spicy Maharashtrian food, then you must have this spice mix powder. The addition of the Goda Masala makes any dish very delicious and tasty. Its spreads it fragrance all over the area and makes the surrounding aromatic. The homemade powder is also more aromatic than store-bought.

The preparation of Goda Masala is a bit long and also time-consuming. It takes some efforts to roast all the spices individually making it a tiring process. But the final resulting taste and texture of the powder is worth all the hard work. Though the actual meaning of “Goda” means sweet, yet the taste of this spice powder is a bit complicated. It has complex flavours due to the blend of different spices.

There is some kind of depth in the texture, taste and flavours of the Goda Masala Powder. It is the most important spice mix powder of various Maharashtrian dishes. The blend of these spices in the Goda Masala Recipe is highly aromatic and flavourful. They come together to make a subtle, sweet and spicy flavoured mix. This masala can be added in all the classic Maharashtrian recipes as well many other curries.

It is very easy to prepare the Goda Masala at home. You have to roast the whole spices one by one and then grind them together into the powder form.

Before you start, take a note that each ingredient is roasted separately on a low flame. You can roast the spices individually if you have time. Otherwise, you can skip roasting them one by one. Instead, roast everything together except the fragrant spices.

How to Make Goda Masala:

Note: Do not use too fine sieve shaker.

This is an aromatic masala for all types of Dal and Curry. This special blend of various Indian whole spices is usually used in a small quantity. It is either added at the end of cooking or fried in the beginning of cooking. It adds the strong aroma and the subtle flavour of the delicious dish. This spicy Goda masala powder is usually added to all types of curries, vegetable dishes, soups, or stews.

If you are using the goda masala powder in your everyday cooking, then you must make small batch of the powder. The fresher the powder, the better would be the taste of your lentils and veggies. For the serving of around 2 to 3 people, you must add 1 tsp. goda masala powder. Always add it in small quantity. It must not overpower the original taste of the dish. While making the subzi or dal, add this powder at the end of cooking. It gives really unique taste, aroma and flavours.

To give the dish touch of authentic Maharashtrian flavours, you can sprinkle little quantity of Goda Masala Powder. This masala gets its distinctive taste and its unique refreshing flavours from the Stone flower. It is one of the most integral elements of this spice powder recipe. This special Maharashtrian spice blend adds special flavours to various Maharashtrian cuisine.

All these aromatic spices give a very spicy taste to the dish but you can add in little proportion to maintain the taste. It also infuses subtle sweetness along with the spiciness. There is more of sweet smelling spices rather than heated spices in this spice mix. This homemade Maharashtrian spice powder mix can be added to any classic dish. Prepare the spice powder with ease and enjoy!

You can add a small pinch of the Goda Masala to any Maharashtrian dish. The small batches of powder is always handy and useful while preparing the vegetable dish or curry. Even this spice mix powder can be added to all the lentils or rice dishes. It is an interesting spice mix to make at home.

The key to store the masala powder at the room temperature. If carefully stored in a container, then the goda masala powder can last up to a year. Its taste and flavours both remain good. If you have always bought the powder from store, then you might be wondering how to make Goda Masala at home. This masala powder from the Maharashtrian cuisine is really simple to try provided you have all the ingredient available in your kitchen.

No matter how much best brand masala powder you use, it’s best to make it at home. Though it takes extra time and efforts, but then it is healthy and hygienic. For the beginners, it is always advisable to try making these spice powders in the small batches first. The preparation of the Goda Masala powder varies from house to house. Each household has its own proportion of masala’s.

There are many different kind of Goda Masala found in stores or you can even make at home. The type of Goda Masala you can prepare is dependent on the availably of ingredients required to use. Also, there is huge impact of the regional preference in flavours of Masala along with the personal taste. Though the proportion of spices may vary but there are some fixed basic ingredients used.

Some common ingredients required for Goda Masala powder are cardamom, cinnamon, cloves, bay leaf, white sesame seeds, coriander seeds, coconut flakes, cassia buds, dagad phool (lichen) and white and black peppercorns. To make goda masala, all these spices are roasted in very little oil. These whole spices are roasted till they become darker in colour. Then they are ground to a powder.

But, you must not skip to add 0skip stone flower or dagad phool in your Goda Masala Powder. It gives the powder the authentic taste and the touch of traditional version. Also, its earthy woody fragrant gives the uniqueness and freshness.

What is Goda Masala?

The Goda Masala is a blend of various common Indian condiments and spices. It is widely used in the food dishes of the Maharashtra region of India and its neighbouring states. There are various different types and variations of the Goda Masala based on the regions and individual preference.

The ingredients used in the making of Goda Masala Powder can vary from one region to region. All the whole spices are first roasted in the oil till they become darker in colour and crispy in texture. Then these spices are mixed together and ground.

Though the kala masala or the black masala is the term which is also used for the goda masala, but both these spice powders are different.

The most important difference is the addition of onions in the Kala Masala. In the preparation of the Kala Masala Powder, the onions slices and sun-dried. Then once they become crispy, they are saluted in the oil. They are fried till they turn golden and become crunchy. The onions must be powdered easily after you break them. All the other ingredients and spices remain same in both.

The dark brownish black colour is infused in the Kala Masala powder due to the fried onions. It is only because of the colour that this spice powder is called as ‘kala’. The word means very dark and black in Hindi. The extra black colour is also due to extra roasting of the whole spices. Yet, there is still little argument as to whether these both spice powders are same or not.

As the term ‘Kaala’ means black in Marathi, this powder with extra roasted spices is called Kala Masala. The main difference between ‘Kaala Masala’ and ‘Goda Masala’ is because of the proportions of certain spices. The point of difference is the degree to which various spices are toasted. Also the change of ingredient in goda masala like sesame seeds and coconut flakes.

How to Select Goda Masala Powder:

If you are getting the whole spices from the market, then choose the spices which stay fresh for much longer. These spices can be roasted and ground when needed in the grinder or a mortar-pestle. Whereas, if you are buying packaged goda masala, then you must check the expiry date. Also, before buying the goda masala powder, check if there is any sign of moisture or lumpiness inside the packet.

Though there are various brands which make the goda masala, but you must only the best. Yet, no matter what it is always best to make this masala at home. At times, it does have an extra effort but the taste of homemade masala cannot be beaten.

How to Store Goda Masala Powder:

The prepared Goda Masala Powder does not remain fresh and aromatic for many days. If kept open then the ground spices will soon begin to lose their aroma. So, you must store the powdered goda masala in an airtight container. Place the powdered form of the whole spices in a cool dark place.

Once you store it in the airtight container, then keep the container in the refrigerator. The goda masala powder stays good and edible for more than 6 months if stored properly. If you are preparing the powder in the bigger batch, then so something to increase its shelf-life.

So, for the large batches of the goda masala powder, before storing in the container, sprinkle some salt. Add the salt on the top layer and then store the powder in the big container. For the everyday use, remove smaller portion of the Goda Masala Powder in a small container and use.

The mentioned proportion of the spices in this recipe yields about 250 grams of goda masala. It is always advisable to usually make a small batches of these spice powders around 100 grams. The Goda Masala powder can stay for months or only a month depending on your usage.

There are not much of health benefits associated with the goda masala powder. Also, as we add the goda masala powder in minor quantities, we cannot get substantial health benefits. However, the digestion of the body is improved with the use of cloves and peppercorns. Also, various spices used in the preparation of Goda Masala Recipe or Goda powder aids the immune functions of the body. 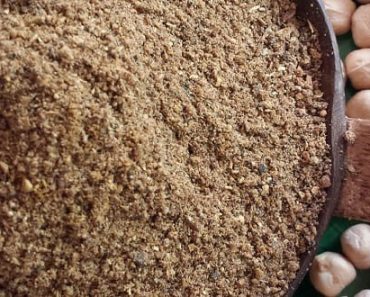 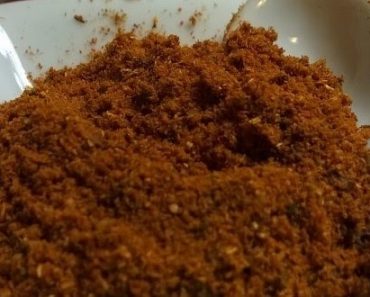 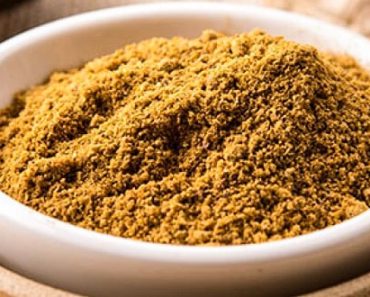 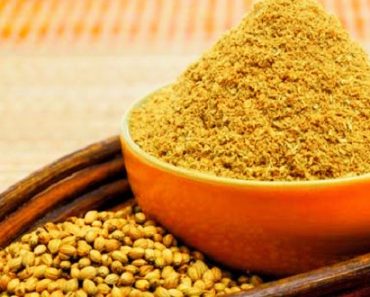 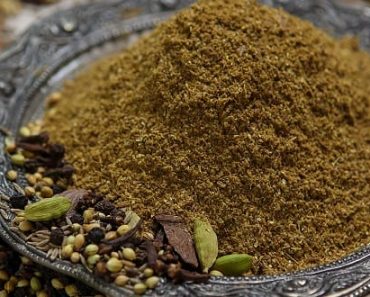 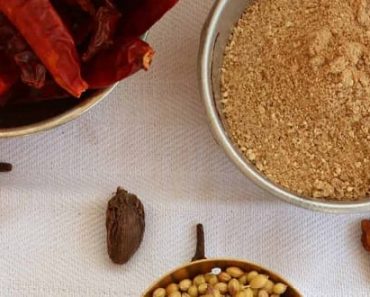